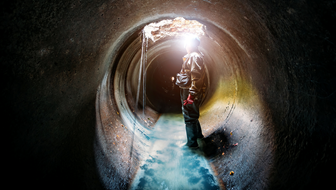 What is a Directional Survey?

A directional survey is a survey method that can be used to map a variety of underground drilling applications. Directional surveys are used to map a planned underground route by using aiding data provided from any combination of directional survey stations. [1] Directional survey stations serve as a reference point that corresponds to a measured depth along the actual bored path known as the actual well path. While the drill bores a hole along a planned route, data regarding the borehole inclination and azimuth is transmitted back to a computer that is controlled by an operator. This data allows the operator to control the speed and direction of the drill as it advances. Directional surveying enables the user to carry out operation with minimal disturbance to natural habitats and helps to reduce accidents that can occur from directional drilling, which is any drilling is not directly downwards.