Before the invention of the Chronometer in the 18th century, determining longitude with any amount of accuracy was nearly impossible (2). This device, which kept an accurate time, made it possible for voyagers to keep track of there geographical position with an accuracy that began to commercialize marine travel.

Max Schuler was responsible for the first seaworthy gyrocompass that was used for maritime navigation in 1908. Shortly following this release, an American gentleman by the name Elmer Sperry launched a similar product. It had a simpler manufacturing process which made it easily producible in large quantities (3). Sperry Marine, now owned by Northrup Grumman, went on to manufacture large quantities of gyrocompasses for many different commercial and military applications.

Early radio and radar navigation worked very similar to how RTK corrections are sent today. When a vessel was close enough to shore, the operator could receive data from a base station on land that sent corrections to the craft. RADAR, formally known as Radio Detection and Ranging Equipment was first used in the 1940’s by the Air Force in World War II (4).

Building off of the early radio based navigation systems, LORAN, which is short for Long Range operated on lower frequencies which allowed for data to be sent up to 1,500 miles (5). Although the position accuracy at this distance was tens of miles, this was a tremendous improvement for marine ventures that required transatlantic navigation.

Dating back to the mid 1960’s when the Space Race caused tensions between the Soviet Union and the United States, early GPS radio signals gave scientists the ability to calculate global positioning utilizing the “Doppler Effect”. The Doppler Effect was an analysis of the shift in radio signals that were received between a receiving host and the satellite. In the 1960’s submarines were used by the United States to carry nuclear missiles and with six satellites orbiting the globe (used to calculate orbital parameters) that could pin-point a submarine’s position in a matter of minutes (6).

Today’s marine navigation equipment must be robust, versatile and built for long term usage. With the marine industry being exceptionally tight on time constraints, money and man-power; all components that go into voyages, testing, and navigation must minimize error at all cost. The navigation sensor solutions of the 21st century should offer end-users configurations for all application types.

A market analysis was conducted to identify the most critical navigation equipment and sensors for marine navigation, surveying, industrial ventures (drilling, cargo-transfer, etc.), and research. An assortment of twenty randomly selected international standard documents, vessel manuals and marine navigation studies were analyzed for their highlighted recommended equipment. The most discussed equipment and sensors can be seen in the plot below (7-26).

The top five most critical sensing components on-board any vessel are (in order of popularity): speed and distance logs, radar or sonar, gyro compasses, magnetic compasses, and tied for fifth – GPS receivers and redundant tracking aids. This shows that regardless of your use case, there are many vital sources of useful information that are available on-board at any given time. From this analysis it is clear that the most useful system that an end-user can benefit from is a sensor solution that has the ability to communicate with these components to receive and send useful data to accomplish a multitude of different tasks.

The marine industry is known for its price tag. Current market solutions for marine navigation and orientation compensation often push reliability and professionalism before product performance and functionality. But why?

An article titled “Why Does Marine Gear Cost So Much” sheds a lot of light on the main reasons behind sensor solutions in the marine industry (27). Stainless steel costs much more than conventional steel, and bronze is much more expensive than brass. Small material changes to avoid degradation due to saltwater and humidity can add a larger price tag to any solution.

Many market solutions bring you consistency without looking for ways to improve and make more efficient solutions. 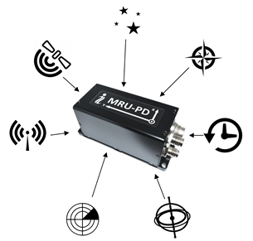 The MRU Kalman filter gives users the ability to control the validity of aiding data or take our recommendations for configuring settings. Either way, the graphic below shows how the MRU takes in different sensor components and is able to produce a robust navigation and orientation solution for the marine industry. 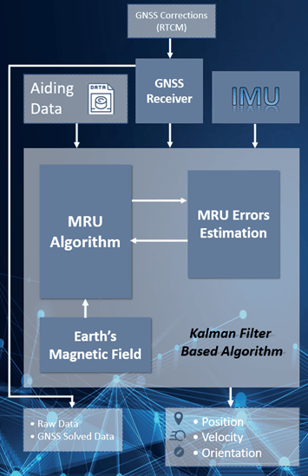 Each unit that is supplied from the Inertial Labs facility comes factory calibrated within its operational temperature range. This means that regardless of the operating conditions, you can trust that the performance will be within the expected values. To affirm the end-user, the unit is then shipped with a Certificate of Calibration which outlines the results and conditions for which the MRU was tested within.

With an exceptionally long recalibration time of 6 years, the MRU dominates the market in reliability and convenience.

Trademark Legal Notice: All product names, logos, and brands are property of their respective owners. All company, product and service names used in this document are for identification purposes only. Use of names, logos, pictures and brands does not imply endorsement. Kongsberg and Teledyne are trademarks of its affiliates or its respective owners, registered in many jurisdictions worldwide.

All citations and bibliographic material are located in the downloadable pdf link.