A lightweight and compact payload, the ROCK R2A featuring the Inertial Labs INS-D-OEM is a cost-efficient and accurate solution for powerline inspection.

Paeonian Springs VA: With a wide breadth of drone inspection and mapping knowledge and a dedicated team of engineers, ROCK Robotic has burst on the scene with the ROCK R1A LiDAR and photogrammetry payload. ROCK Robotic has just recently finished development for their newest payload, the ROCK R2A. Featuring the Livox Avia LiDAR scanner mounted onto a lighter aluminum enclosure, the R2A is light enough to fly on the DJI Matrice 200 and 210 Series (versions 1 and 2), Matrice 300 RTK, the Matrice 600 Pro, the Freefly Alta X and many other custom platforms.

A major factor in the success of Rock Robotic has been their partnership with Inertial Labs and their use of Inertial Labs inertial navigation systems in their payloads. During a brief interview, when asked about the quality of working with the entire Inertial Labs team, CEO and Co-Founder Harrison Knoll (also known by many as the YouTube sensation, Indiana Drones) responded with the following statement:

"The Inertial Labs team has a deep understanding of the whole navigation technology ecosystem; this has made their products offer world class performance and maintain easy integration and interoperability with GNSS receivers and onboard computer systems. Now when I think about best-in-class accuracy, I think Inertial Labs." 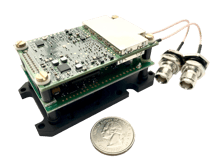 The Rock R2A utilizes the Inertial Labs INS-D-OEM inertial navigation system featuring temperature calibrated, and precisely aligned tri-axis MEMS accelerometers and gyroscopes. With 20 years in the position, navigation and timing industry, Inertial Labs has been able to develop hardware solutions integrating many different types of sensors to ensure accurate time synchronization amongst independent data packets to result in a guaranteed high-performing system-level solution. These high-quality systems, components, paired with a robust onboard Kalman filter, result in trajectories with heading accuracies of 0.03 degrees and pitch & roll accuracy of 0.006 degrees. These values directly affect point cloud accuracy, which is why the team at Rock Robotic chose the INS-D-OEM to be the solution for the R2A and can confidently specify a system accuracy of 5 centimeters or less.

The advent of drone LiDAR payloads has had a profound impact on industrial inspection applications such as powerline inspection. Once a labor-intensive, time consuming, and potentially dangerous process for ground inspection teams, powerline inspection with the R2A is an accurate, cost-effective, and time-efficient alternative to in-person ground-based surveillance. The multiple return method of scanning with the Livox Avia and excellent position and orientation accuracy from the INS-D-OEM ensure that the R2A provides a highly dense and accurate point cloud for powerline classification. ROCK Robotic displays the simplicity of powerline inspection with the R2A in a video walkthrough of the unit mapping a sub-circuit in an urban environment shown below.

"It really has been a great marriage of skillsets", said Inertial Labs CEO and Founder Jamie Marraccini, "with ROCK Robotic's vast knowledge of the drone-based surveying market and industry and our experience in the inertial navigation field, customers can trust that ROCK LiDAR payloads have been designed by a collective team of professional and experienced engineers with the customer's best interest in mind."